I’m sitting at my house in St. Louis, watching MSNBC with my parents. I don’t really think I’ve sat and watched daytime television in a very long time. This channel must also be aimed towards old people, because one thing sticks out from watching TV any other time of the day: the HORRIBLE commercials. In about 30 minutes, I’ve seen some of the worst and most ridiculous commercials I’ve seen in the past 22 years and 5 days (note, that’s how long it’s been since I was born). And yes, this includes Japanese commercials, which are also retarded but amusing at the same time.

First one that sticks out was one of those generic law firm commercials, which says they cover personal injury law. Castle Law is the one that they always play in Indiana I think, with the really pissed off old guy. Maybe Keller & Keller? Anyways, I saw one today with the exact same set, script, graphics, and everything. Except instead of the pissed off old guy, it was WILLIAM SHATNER. Come on! (said in the Arrested Development GOB voice). Who is going to call a law firm just because James T. Kirk is pitching it? That’s right, stupid gullible old people. Poor old people who watch this stuff all day. All of these commercials are targeted to screw the old people. They don’t even try to make their commercials good, because they know they’re gonna hook some old people either way. I also saw a hip replacement commercial, weight loss plans, joint replacement, and about a million other health/medicine/life insurance ones. Still waiting on the viagra one.

The one that was the worst, and prompted me to write this blog, was for a little device called the Pasta Express. The fat lady in the commercial promises that it will make cooking pasta (also vegetables and more!) so much easier. Thank goodness! Because it’s so freaking hard to boil water and make noodles. I do it about 3 times a week and I’m not complaining. And I complain a lot. So let me try and summarize this modern marvel.

First, you take the plastic device, that looks like a tall plastic tube, and put your pasta, vegetables, human heads, whatever, into it. Then you boil water (in what, who knows), and pour it into the tube. Wow. Don’t ask me why you wouldn’t just boil water and pour in your pasta (ie, the NORMAL way). So let’s keep going with this wonder device. After pouring in your water, and scalding yourself in the process, you put a plastic strainer lid on the top of the tube. Then you put another lid on top of that, and watch as your pasta time-lapse cooks and becomes limp (no joke inserted here, it would be too easy). Then when you’re pasta is done, you take off the first lid, and shake out the water with the AMAZING plastic strainer lid. Note that since the lid likely sucks, and is getting pushed with a whole plastic tube full of pasta, your pasta will likely fall into the sink, wasting your $20 and also your $2 box of linguini. If you somehow keep your noodles in the tube and strain the water out, then you can take off the strainer lid and pour your pasta onto a plate.

That’s that. You can also pour sauces, butter, cheese, etc into the thing and really mess up your strainer lid. But that’s not important (nor the point). No, this product is made for old people who are easily fooled by the time lapse footage and think this device is some kind of magic time trap that will cook your pasta in 10 seconds like the commercial showed. Can you imagine pouring boiling water into a skinny plastic tube (and actually making it all in?), then expecting it to cook a tube that is completely full of dry spaghetti, and waiting an hour while the water cools off and you’re left with a tube of half-cooked pasta. Yay.

Old people: since I know so many of you read my blog here at TheLeong.com, please listen to my wise advice. Don’t order anything from daytime TV infomercials, let alone this pasta tube. It won’t cook your noodles, you will scald your hands, and you will be left limp and unsatisfied (I’m talking about the pasta, you perverts).

Just a test, to see that my blog is now…

That took way too long

So I haven’t really played with HTML in a long time, so what I thought would be a simple task of moving the Blog Archive stuff from the right side of this page to the left side (under the main link buttons, where they are now) became a mega long timewaster. I got to play with Dreamweaver again, and yes it was a pain in the butt. I think it looks better now. I have approximately 600 or 630 pixels (I think) across of actual blog text, meaning that I can also put wider/bigger pictures in blog entries. Hope everyone’s break is going good (if you’re on break). Comments are low; holla if you’re there.

It’s the 25th: a Modest Proposal

Break has been very good to me so far. I’ve pretty much done nothing (not even IUSTV stuff): I sleep in late, watch a lot of TV, play a lot of video games, and that’s about it. I’ve been playing Mario Baseball, Naruto Narutimate Hero 3, and I just finished…uh, getting, Kingdom Hearts 2, which just came out in Japan a few days ago. Between these games and some of the other ones I brought back with me to St Louis, I think I should have a lot to keep me busy.

So I went to LHS on Thursday. Talked to the electronic media class (video production, where I got my start), visited a bunch of teachers and principals (who surprisingly, all remembered who I was), and actually got some advice on my future. All in all a good trip. Although waking up that early in the morning should be outlawed; I don’t know how I did it back in high school. Nowadays I’m lucky if I can wake up by noon.

It is now a little past midnight, meaning it is December 25th. It’s Christmas, Hanukkah, my birthday, and also the 2-year anniversary of me having this website (even though this is a different domain name, it’s the same site as aleong.com). Now for my proposal. Instead of all these holidays around December time, based on religion, based on “heritage,” or based on the lineup of the stars (I dunno), we should move towards a unified holiday for EVERYBODY. I know just someone who was born around this time that could be used as the base for this holiday. His name is Anthony Leong, and he was born on December 25, 1983. Because everyone already has winter break off for holidays and stuff, let’s keep that all the same. I just propose unifying all the naming of holidays, etc. This will include cards, decorations, etc. Everyone can keep the same stuff they had before, but for political correctness, everyone can just use 1 name for this holiday season. In fact, I have made a sample of a holiday decoration for this new, WORLD UNIFIED HOLIDAY. You can click on it to get a larger version, suitable for print out for use on greeting cards, t-shirts, and wrapping paper: 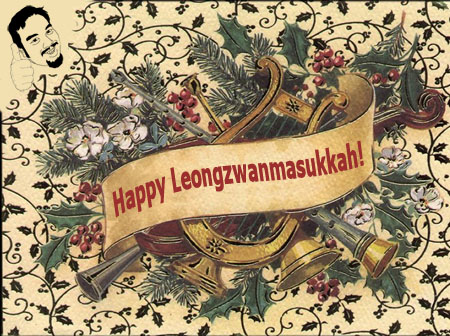 Yes, that’s right. Leongzwanmasukkah. You get shout-outs to all the other 3 big holidays, but instead of trying to guess which holiday someone celebrates, fiddling with the awkward phrase “Happy Holidays,” or just saying some other generic term for sound P.C., everybody, let’s start using Leongzwanmasukkah. It is a holiday that can be shared by everyone, regardless of religion, race, heritage, species, or number of tails. EVERYONE WINS WITH LEONGZWANMASUKKAH.

Needless to say, this was a good idea when I thought of it. I played Narutimate Hero 3 for about 4 hours solid, ate some freshly baked brownies that my mom made, and am now loafing around some more watching TV. Break is good. Happy Leongzwanmasukkah, everyone. Please send gifts, cards, and kind words.

I’m thinking about re-designing my page over break, but I probably won’t because I’m really busy (haha oops Seth). But seriously, I was bored yesterday and went to Borders, where I read a book on Dreamweaver for about 2 hours. I’m a nerd, and a cheap nerd at that. At least I bought a coffee so they can’t say I didn’t give them any business.

A real quick change that I can do in like 5 min if people think it would be good: should I move the Blog Archive and button stuff (on the right of the text) to the left column, thus adding more space in the main area (where the blog text and pictures go?). I don’t know why I didn’t do this initially (well, I do, it was just being lazy with my template), but it would give me more space for blog stuff. If you loyal readers (both of you) think I should do it, or think I shouldn’t, then comment here and I’ll follow the vote at the end of the week.

Funny note: I was at CompUSA yesterday and saw an old couple (about 65 or 70?) who both had the exact same hair doo. It was a badly dyed brown fro. I took a pic with my camera phone, so if it turned out OK I will post it here fo sho.

If you use Firefox to browse, I highly recommend upgrading to version 1.5. Why? Because when you use the comments feature here on THELEONG.COM, the older versions of Firefox screw it up and you have to scroll a little bit to the right. In version 1.5, it handles the window dimensions just fine and it looks GOOD.