One of my accounting textbooks was talking about statistical analysis using computers, and had this photo.  I had no choice but to laugh, take a picture, and upload it here for no one’s enjoyment.  Computers one day may be in many homes!

Benefits: can display several shades of green to help visually represent data, business records can be saved on floppy disks that hold over an entire megabyte each.
Downsides: very costly and not realistic for home use, internet will not be available for about 10 years. 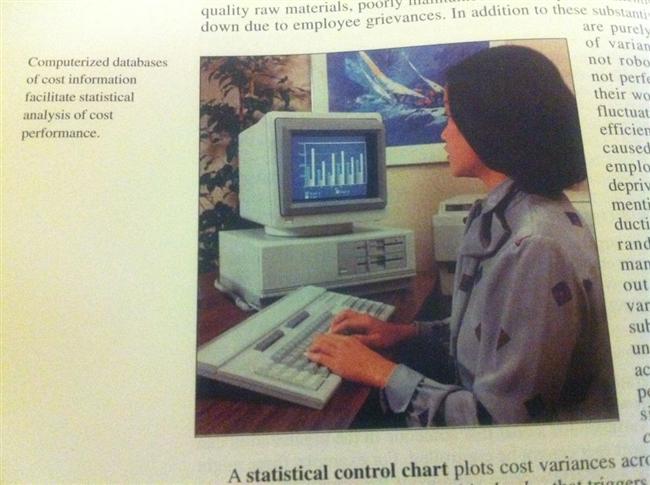 I was pretty surprised when I opened up Google Reader earlier this morning and saw this:

CNN apparently discovered that is not what they meant, and it has been changed.  The article‘s headline now reads “Vatican overhauls sex abuse case procedures.”

I’ve been using the same dry cleaners since I moved to Chiba city back in late 2007.  It’s right around the corner from my apartment, and is cheap and fast which is nice.  The weird thing about dry cleaners in Japan is that they’re everywhere.  There might be almost as many cleaners as there are convenience stores, and those are pretty much on every block.  I’m exaggerating, of course, but just barely.  On my way to the grocery store, for example, which is only a few blocks away, I pass by 3 conbinis.

But oh yeah, my dry cleaners story.  So my dry cleaners has a stamp card – every time you spend 500 yen, you get a stamp.  After 30 stamps, the card is full.  Nothing is written on it about what happens when you fill up a card, but I assumed you get some kind of prize, or maybe special membership status, etc.  I wasn’t really sure, but since I had to get my suits and stuff cleaned anyway, it didn’t really matter.  I was kind of looking forward to fulling up the card, though, in the back of my mind.

Then finally, today, after two and a half years of watching the stamp count slowly increase, I finished it.  I had 30 little “Masaki” stamps and I was ready to claim my prize.  Victory was mine.  Would I get like a special gold card to show my status as a power user of the dry cleaning shop?  Maybe a gift certificate to help offset my years of dry cleaning costs?  Sure if you do the math I’d only really spent about 15000 yen (USD$150) over 2.5 years, but the buildup was killing me.  The grumpy old dude at the cleaners took my dirty clothes today and stamped my card to the last blank space (what you see on the left here is the new card).

And what did I get for my waiting?  My grand prize for cleaning my suits and shirts enough to warrant a second stamp card?

Umm yeaaaaah.  After loyally going to Masaki Dry Cleaners for 2.5 years, my prize for filling up the stamp card was a pack of &#@%ing trash bags.  A whole buck fifty’s worth of plastic bags.  Thanks a lot grumpy old dude.

Found this image on some weird Japanese video game fan art page. This is by far the best one:

I remember once upon a time I wrote things occasionally on this blog that were funny or interesting, but recently I feel like I haven’t been posting anything but boring LiveJournal-esque stories about what I ate for lunch or what color socks I’m wearing*. I should try to change that, but I think a big part of the problem is that my life has been so mundane lately there isn’t much else to write about. I don’t even have as many complaints about Japanese culture or society because with the whole working at home/flexitime thing these days I’m not getting exposed to the public as much as before. That is not necessarily bad.

I’ll try and come up with better material one day, but don’t hold your breath. This blog has still and always will be for myself and my own amusement, slightly adjusted for friends to read and perhaps waste a few minutes of otherwise productive time wasted browsing the interwebs.

Quick story: This is about one of the hobos here in my city, who I guess I’ve started calling No-Nose Joe on account of a bandage or duct tape always covering his likely frostbitten/missing nasal organ. This guy has a very impressive collection of hobo junk, usual stacked on his tiny (child’s?) bicycle, which he is usually seen creeping along on near Chiba station or Yodobashi Camera. I say creeping because I’ve seen earthworms move faster than this man. I was pretty surprised a few weeks ago when I saw ol’ No-Nose Joe in the supermarket near my house, where he was creepin’ along with a shopping cart rather than the usual bike chariot. He was, of course, in the liquor aisle, mentally debating which carton of cheap booze to buy for the night while at the same time doing a great job of repelling other customers from the aisle because, let’s be honest, hobos don’t smell great**. I too was trying to avoid him, but after making my rounds in the store and completing all my other shopping, I still needed a loaf of bread and Joe was still blocking the bread shelf, which is in the same aisle as alcohol. I took a deep breath, gripped my basket, and headed into the aisle. . .

I don’t know what I did to this man, in this life or a former one, but somehow he is deathly afraid of me. As soon as he spots me entering the aisle, his eyes open wide like a deer in headlights and he goes off in the opposite direction. I don’t mean he creeped away at his usual 1mph – he RAN away from me as if I were charging at him with a bloody machete. I was of course startled but more surprised at the fact that this normal slow-moving homeless man had apparently channeled into Usain Bolt. End.

So yeah, other boring stuff.

It’s been just over 4 months since I left my last job at a Japanese company and started working for this American start-up doing business development and stuff. The job is great: I have a lot of freedom, work at home, and even get to travel sometimes. I have control and responsibilities that I never even got close to having at my last job. The problem (well, not really that bad) lately is that I’ve been given so much freedom and open-ended goals that it’s difficult to get myself focused. Of course I like having freedom, but sometimes I do slightly miss more concrete direction and specific assignments. It’s a lot like running my own business, so I guess I just need to get more used to working like this.

It’s been almost three years since I graduated from IU and headed out to Japan to work. I’ve changed jobs a few times, done a lot of fun stuff, met a lot of good people, but I’m finally starting to see that it might be time to leave Japan. It’s not that things are bad here at all, but I feel like it’s time to move on. It would be more beneficial for my work for me to be in St. Louis as well, and I’m definitely looking forward to having an apartment again that has space for furniture and a giant computer station like I used to have. Japan is great but if there’s no specific reason for me to be here, I don’t think I should stay. One reason I didn’t leave immediately after starting this new job was the chance that I’d be starting up business here in Japan, over in China, and other places in Asia that would make it advantageous to have someone already in the region. That possibility’s not gone at all, but I personally haven’t been focusing on it much yet, which means that the company’s not either. I’m thinking that if I get some solid reasons to stay in Japan, like with work, then I could definitely stick around for a bit longer. But on the other hand, if I don’t end up doing that, then it’s probably time to head back to the “real world.” I’m thinking I’ll give myself until next spring.

*white, if you really want to know

**of course, if you don’t have a nose, you probably don’t care what you smell like. NNJ ftw.

Ma’am, is this your giant bag of raw chickens?

Almost forgot about this. This was the best customs poster I saw during my last trip. No, probably ever. It’s from the Hong Kong Food and Environmental Hygiene Department warning about fines for smuggling raw meat and vegetables across the border. Or something like that (I can’t read Chinese).

I don’t know what’s better, the fact that the old woman has a giant flannel bag full of raw chickens, or her bright velvet Rick James pants.