After a half weekend, I finally had a really good day off. What’s that? A half weekend? Oh allow me to explain. Every now and again apparently, AEON schools have a fun little event they call “Sunday Open.” This means that they open up on the normally closed Sunday, so that they can interview prospective students, teach some special classes, and so on. I was the lucky teacher chosen to work this Sunday Open, so I thus lost half of my weekend. I was paid for it, and it was only 5 hours of work, but I do have to say that I might have rather just slept all that afternoon rather than waking up and going to work on my usual day off.

But that’s all behind me now. Today, you see, I ventured to the nearby station called Soga. The last time I came here was sometime at the end of September when I was still trying to find a cell phone. I had heard that Blanchard got an au phone without his actual Gaijin Card, so I figured I could maybe try the same thing. I had gone to the nearby Goi au shop to check and they had (apparently wrongfully) told me that it would be impossible to get a phone without the magic card. Anyways, I knew Soga was a fairly large junction station, so I had assumed there would be big department stores and other cell-phone-carrying shops in the area. After walking around the station and not finding anything, I walked further away in hopes of finding something. After about 45 minutes of walking, I was in Chiba, the next big city up. Ah well. A wasted morning, and a ton of walking. After that fiasco, I figured that Soga was a bust and there was nothing there except pachinko parlors.

I recently found out from one of my students that there is a major shopping mall in Soga, apparently a short (and free) bus ride away from the station. Score. I checked out the mall, called Ario, and it is pretty nice. Everything looked brand new actually. Most of the stores are clothing, so there wasn’t too much for me to actually buy, but there was also a huge Ito Yokado department store inside that was kind of cool to walk around. After Ario, I hopped onto the free shuttle to the next place, called Festival Walk, which was equally if not more impressive. 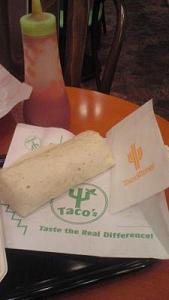 Festival Walk had a huge arcade, Sega Arena, a movie theatre, and a really nice internet cafe. The net cafe seemed way nicer than others I have seen, with a bigger cubicle, better recliner, and nicer computer/LCD TV monitor. And not only were there free soft drinks, but there is free smoothies and soft serve ice cream. Pretty good deal, and this place also looks brand new. On top of all that, there is also free darts and billiards, making this place a good candidate for an all-nighter. I think I might try it sometime soon. This Friday is a holiday, so maybe then.

And the best discovery of the day was a place called Poca Tacos. At long last, MEXICAN FOOD! I couldn’t believe my eyes when I saw the place. In case you didn’t know, Mexican food in Japan is about as rare as any food can be here, so it was a welcome sight. I ate a bunch of food there, and it was really good. I had nachos, a small burrito, and a bunch of chili cheese tacos. Sounds weird, but they were pretty good. This place is only about a 10 minute train ride from Goi, which means I’ll be likely visiting Soga a lot more from now on. Please see the picture on the right to see the discovery of the weekend. And yes, the napkin does say “Taco Time.” Viva Soga.