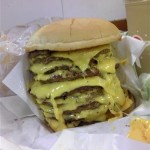 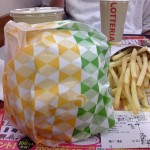 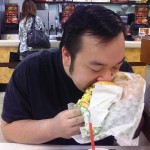 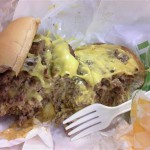 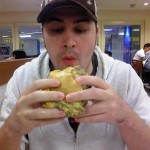 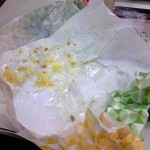 If McDonald’s Japan didn’t kill you before…

Wow. You may remember me telling you about the ridiculous Mega sandwiches that McDonald’s Japan served up for a limited time. I also blogged about it, and still have regular hits from Google Image Search for that post. Anyway, apparently McDonald’s wasn’t satisfied with it’s last raid on Japanese hearts, and is now preparing another wave of attack. But they’re not just coming with their same old mega artery clogger strategies; they’ve got some new firepower this time around.

Behold, the next wave in McDonald’s Japan’s tactics to sink this island nation:

Yeah that’s right. 3 sandwiches all coming out for a limited time soon. The press release page is here all in Japanese. The official Mega Mac site is supposed to be updated tomorrow. Let me summarize the press release a bit for you. First, this purple text is a semi-translated version of the headlines at the top.

Mega Happiness (メガな幸せ)?! Are we joining a cult? This sounds horrifying. Yet somehow drawing. So basically they are offering different Mega sandwiches depending on the time of day, probably with the hope that someone will be so fat and retarded that they’ll eat Mega burgers for every meal of the day, which I believe is exactly what turned the Gremlins from furry baby monsters into the huge creepy monsters singing New York New York. And since these regular but sporadic Mega Mac assaults can only do so much, they’ve also decided to add the normal Mega Mac to the regular menu after this whole campaign is over. It will probably never go away.

The bad boy that started it all, the Mega Mac is like a double Big Mac, with 4 beef patties. The Mega Teriyaki, which came out in the 2nd wave of Mega in June 2007, is two pork patties covered in teriyaki sauce. The new weaponry this time around, the Mega Muffin, is the Egg McMuffin on crack. It’s two pork patties, an egg, and bacon on an English muffin. Sure it’s not as horrible as it could have been (more egg, hash browns, patties of butter, babies), but this has got to be almost comparable to that thing Burger King tried to pull off years ago, the Ultimate Omelette Sandwich or whatever.

I love the part in the press release where they go on about this stupid campaign: This time, we’re not only reviving the Mega Mac and Mega Teriyaki, but to answer the many requests to “be able to eat Mega anytime,” we are debuting the Mega Muffin in the breakfast hours. What people are requesting these beasts? Average retail price for the Mega Muffin is 290, Mega Mac is 380, and Mega Teriyaki is 360. That’s just the sandwich, not the set. The US dollar has dropped to about 1 to 100 yen, so the conversion’s pretty self-explanatory.

I guess these aren’t quite as deadly as the Mega Tamago I ate, but I’m pretty sure I won’t be eating any of these regardless.

The King and I

Yeah, yeah, this is nothing to you people living in America, where Burger Kings are on every corner situated next to Jack in the Box, White Castle, and Wendy’s. But this is Japan, remember? There are only 2 BKs in the entire country, and both of them opened in June. Burger King was here a few years ago, but did poorly so they closed down. But they’re making a comeback. And it was amazing.

Last Monday I was in between job interviews in Shinjuku and was feeling hungry. I was passing through the i-Land shopping mall area on my way back to the subway, and checked out the directory to see what food they had to offer. And I saw Burger King. By sheer coincidence, I stumbled upon Burger King! And I tell you what, it was the most delicious BK I have ever had. It was so fresh, so delicious. Definitely beats the McDonald’s burgers, and might very well beat restaurant burgers here as well, although I don’t really get them that often. And they just started having onion rings too, which was a welcome surprise.

Every Japanese person I’ve told about this, which is about 2, gave me an unimpressed “was it really that good?” The answer is YES, it was. Too bad it’s about an hour and a half away from me.

Unbelievable. A terrible tragedy. No more McChicken sandwiches at McDonald’s here in Japan.

I was hanging out in Chiba on Saturday night and things were winding down. Having not eaten any dinner and with only 30 minutes left before last train, I decided to hit up McDonald’s. Now, I very rarely eat McDonald’s, and when I do I am very set in my ways. Of course if breakfast is being served, then it’s Egg McMuffin time. If not, then I will usually get a cheeseburger and a McChicken with medium fries and no drink. Sometimes instead of this I will vary it up and get a double cheeseburger set with Qoo to drink. However, I never vary from these patterns. McDonald’s in Japan is still as bad for you as in the States, but they actually make food fresh here so it doesn’t taste as nasty. The McChicken here is really good because it’s only 100 yen (less than a buck) and they use spicy mayonnaise, which they don’t use at the US McD’s.

So yeah, Saturday. I step up to the plate and make my normal dinnertime order. The woman says “I’m sorry but we stopped selling the McChicken. Instead, we now have the McPork.”

Out of shock I kind of thought out loud and was like “Pork!?” Then, this was funny. The woman walked towards to the kitchen area and actually asked her manager if the McPork was made with pork. I mean, yeah, this was all in Japanese and we were using the word for pork (豚肉) rather than English like the sandwich name*, but you’d think she wouldn’t have to double check with her boss as to the contents of this new menu item. This would have been even funnier if the manager said it was made with something else, but at least they got the animal right.

Goodbye cheap chicken sandwich. Instead they are now peddling this thing you see to the left, which to be honest isn’t too terrible, but it doesn’t beat the chicken sandwich that once held the headline spot on the 100 yen menu. It is a pork patty covered in like a teriyaki sauce, with some scraps of lettuce and onion on it. Like the midget little cousin of the McRib.

*most sandwich names at McD’s Japan are the same as the US, and in English